skip to main | skip to sidebar

Marching for the lives of teachers 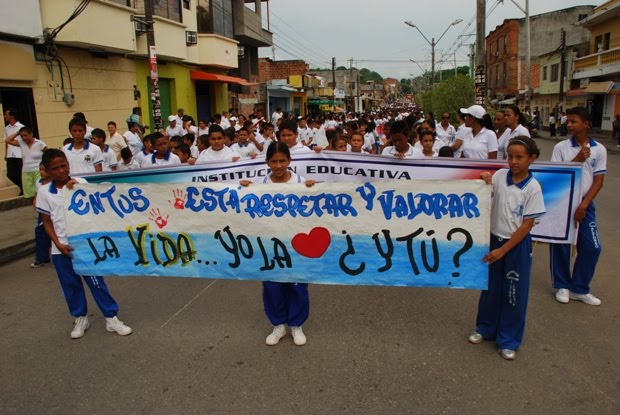 Photo of students with banner, “It’s in your hands to respect and value life.  I love it, do you?”

More than 2,000 students and teachers marched through the streets of Puerto Berrio on March 17 to protest the killing of a teacher and his wife. Duvian Rojo and Veronica Cadavid were killed by two gunmen in the center of town on the evening of March 13. Puerto Berrio is controlled by paramilitary death squads that have relations with the police and military, and the killing occurred just two blocks from the police station. Duvian and Veronica were the parents of twins that are less than a year old.

The paramilitaries have been extorting more than 20 teachers in the town – demanding that they pay protection money in order to avoid being killed. Duvian filed a complaint with the prosecutor’s office that led to the arrest of two men, although none of the paramilitary leaders were arrested. His colleagues believe that he was killed in retaliation for speaking out about the extortions.

I felt a lot of tension at the beginning of the march, more so than at any other activity I’ve accompanied here in Colombia. I asked the parish priest, who had invited us to the march, if I could take some photos. He responded that it would be better if I did not. One of my teammates, who had been married by the priest, talked to him later and he agreed to let me get some shots. I was introduced to a man who then walked with me to the front of the march. The march stretched out for several blocks and it was very inspiring to see so many students in the streets of Puerto Berrio.

We met with a group of teachers after the march in the church, Our Lady of Sorrows. One man was wearing a t-shirt with a photo of Duvian that read, “Friend Duvian, you will always be in our hearts.” The teachers were very concerned about their safety and asked us to not mention their names. “You wonder if you’ll be the next victim,” one of them told us.

They described the relationship of the paramilitaries with the police and military. “These groups are mixed together with the authorities.” They also talked about the location of the killing – two policemen are usually stationed there and it’s near the station. “They (the killers) exited to the left and the police came in from the right.”

Puerto Berrio is a town of 50,000 inhabitants, located two hours south of Barrancabermeja. Two paramilitary groups are fighting for control of the cocaine trade in the region, and one of those groups has apparently entered into an alliance with the National Army of Liberation (ELN) guerrillas. The priest told us that three to four people were killed each week in Puerto Berrio during February. In the midst of all this, the teachers are determined to continue forward and to denounce the abuses that occur in their town.

Sister Miriam accompanies workers in the palm oil plantations near Barrancabermeja. During the meeting with the teachers, she said “Peace can appear to be a distant dream. However, there are new sprouts and signs of hope. We’re weaving together networks of people.”

In love and solidarity,

I don't know if you have been hacked or what but that sign-in message messes things up.

Maybe they should have joined their narco terrorist pals at FARC.

Spare us the hypocrisy.

Funny officers see thousands of Colombians and not one of them ever has a bad word to say about the government. However, every single person fleeing Hugo's crack den has plenty to say about the demented imbecile who would be God.

beakerkin, you're an asshole. the world has a bunch of em. unfortunately, some just don't smell ass bad as you, beak

All better. Beak is the human equivalent of gum disease. Thanks to US support, Colombia is a neoliberal narcostate assigned to police the region and secure oil/ mineral leases.

The facts remain that Venezuela not Columbia is a Narcoterrorist state.How do so many people tell identical lies to immigration officers?

Maybe Che Bob needs to go and take the job of those teachers. Hopefully, the locals will similarly dispose of low rent human garbage in a similar manner.

The evidence of ties to FARC, ETA and drug dealing of Chavez are overwhelming. You are entitled to
your opinion, not your own facts.

FYI It seems that when commies deny
political prisoners water Che "Sponge" Bob is silent. Then again
the role model of Ren is Herman "Convicted Sex Offender" Marks so what does one expect.

On one of Puerto Berrio's native sons...

Felix Antonio Muñoz Lascarro also known as "Jose Lisandro Lascarro" or "Pastor Alape" (born June 4, 1959 in Puerto Berrío, Antioquia) is a Colombian guerrilla leader, member of the Revolutionary Armed Forces of Colombia (FARC) and part of their higher command known as the Estado Mayor Central which is made up some 30 to 60 members. In March, 2008 Torres-Victoria was appointed as possible substitute to one of the seven member secretariat of the FARC.

According to the United States government Muñoz-Lascarro oversaw production of the Magdalena Medio Bloc’s cocaine supply, participated in setting and implementing the FARC’s cocaine policies directing and controlling the production, manufacture, and distribution of hundreds of tons of cocaine to the United States and the world; the "taxation" of the drug trade in Colombia to raise funds for the FARC; and the murder of hundreds of people who violated or interfered with the FARC’s cocaine policies. Muñoz-Lascarro was responsible for providing the Secretariat and Estado Mayor with billions of pesos each month. He has ordered acts of violence (bombings and murders), including orders to kill farmers who sold cocaine paste to the United Self-Defense Forces of Colombia (AUC). The U.S. Department of State is offering a reward of up to US$2.5 million dollars for information leading to his arrest and/or conviction. On September 27, 2010 the Farc said Mono Jojoy had been replaced on its ruling secretariat by another guerrilla commander, known as Pastor Alape.